If you live in an apartment, then you know how annoying it can be.

For most folks, owning a home might take ages and could be a dream not come true especially with the rising cost of living.

According to data published on Statista website, 24% of New York population live in apartments. (Source)

Living in apartment has always been one hell of a rollercoaster living.

One moment you’re living in a quiet haven and the next moment hell breaks loose.

The gadget serves to alert/warn upstairs neighbors that they’re being noisy.

If the neighbors won’t stop being noisy you can increase the vibrations/shock speed allowing you to get even.

It’s attached to the ceiling and once switched on; it sends vibrations that can be felt by upstairs neighbors.

The unit boasts pre-installed programs you can choose from.

The three versions are:

Of the three variations, shock and beat is the most commonly used and I would pick it any time as it gives a two in one functionality.

Note: It is recommended to find a helper to support the pole during the initial

installation. Do not put the screw base in a soft place such as a sofa, otherwise it will

Make sure that the shorter the pole is, the more stable it is. The bottom is a stool table, which can effectively reduce the impact on the home and downstairs.

Observe the condition of the machine and pole after installation. If it wobbles, it means

that it is not installed properly.

The gear + and gear- buttons allow you adjust the beat speed. There are 9 kinds of beat speed, F1-F9- progressive beat intensity 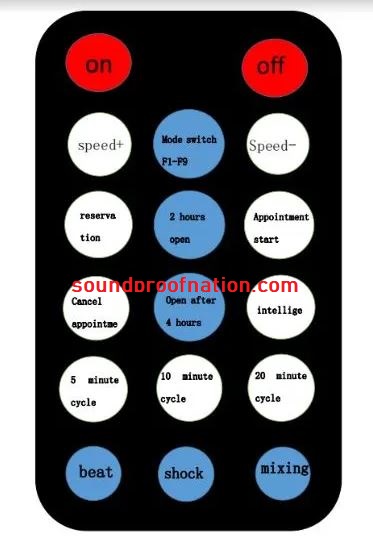 Below is a detailed guide of the beat/vibration’s mode:

Thirdly, you need to adjust the required mode first when you make an appointment,

press the vibration button to start working, then press the appointment to adjust it for

1-8 hours and then turn on, then press the appointment to start and start timing.

After the machine is powered on, first press the power to turn on, and then press

the vibration button to start working.

U at the beginning represents the vibration mode

And don’t worry, this gadget won’t interfere with the structural integrity of your apartment. Therefore, you won’t get yourself in trouble with the property management.

I purchased one on aliexpress and arrived in a week.

This can be used on the ground for the neighbors downstairs?

🇨🇦 Sounds like 🥴 a good line of attack when the bastards just don't give a crap about your peace and quiet. What would be better is a sensor in the product that responds on its own, to every thumping beat or foot stomp.

Vibration mode. Does it run at different frequency and can you play tones like a tone generator. Are these perceived vibrations or does it rattle the floor? How much floor space does it target? Is this the one with shock mode ..what does it shock? How loud is the motor on this device?

I wud like to buy a ceiling vibratory n how to order from u pls? To be sent to Singapore.

@Ken Tan, it's illegal to purchase a ceiling thumper in Singapore !!!