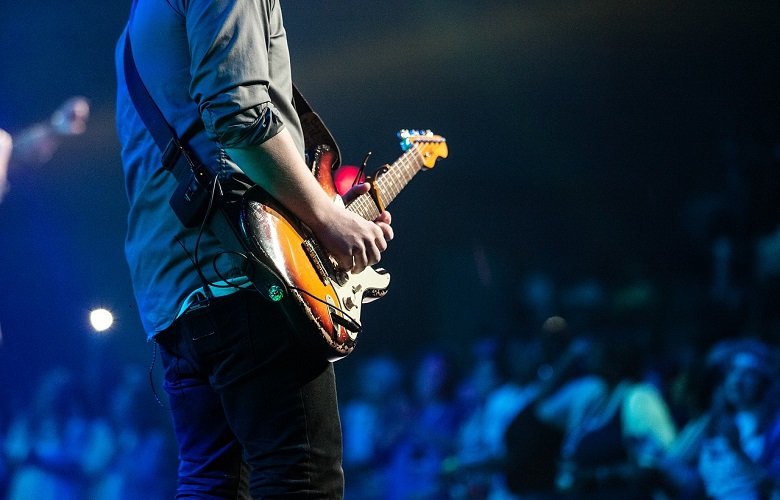 If you’ve been into a live performance show, you may have witnessed that performers have earpieces in their ears. But why do singers wear earpieces when performing on stage?

Well because of the background noise during live performances, it’s very crucial for singers and musicians on stage to hear their own music.

The traditional methods involved setting up a speaker/wedge monitoring.

They would set the speakers on stage facing the performers such that the audience won’t hear them over other speakers.

However, the popularity of In-Ear Monitors (IEMS) has made them popular choices for many singers who perform live.

Rather than setting up a bunch of speakers that take up performance space, singers are able to hear their own mix from a simple earpiece.

It’s much convenient for musicians to wear earpieces to monitor their mix than setting up monitoring system.

Now you that we’ve answered your question on why do singers wear earpieces, lets have a detailed overview below.

Contents show
What Are In-Ears/ Earpieces?
What Do Singers Hear in Their Earpiece?
How Singers Earpieces Work
Why Do Singers Wear Earpieces?
Hearing Protection
Sound Quality
Move Around the Stage
Mix Customization
Help in Metronome Use
Provides Sound Consistency
What are the Advantages of In-Ear Monitors?
Conclusion
Related posts:

What Are In-Ears/ Earpieces?

In-ear monitors are devices used by, audiophiles, audio engineers and musicians to listen to music or to hear stage instrumentation and personal mix of vocals during studio recording or live band performances.

They are the same devices used by television presenters to help them receive vocal instructions and breaking news from the producer.

Before the discovery of the in-ear devices, musicians would perform with loudspeakers placed on the stage facing the performers.

Since musician’s wear earpieces on each ear, they are able to hear a stereo mix and recent advancements allowing the performer to adjust the amount of ambient noise.

What Do Singers Hear in Their Earpiece?

These devices also allow the singers to hear the performances of other singers and instrumentalists on stage.

They help the artists to perform in harmony and achieve better synchronization.

With the in-ear monitors, the artist can listen to a back track- recording of synthesized instruments recorded in a studio. Backtracking allows artists to perform sections of their music that are impossible during a live performance such as choir parts, drumming, and string sections.

The earpieces a singer wears during live performance also allows the singer to click track. Click tracking is a series of audio or beats cues that serve as metronome. It helps musician maintain a perfect tempo with better synchronization with the band members. Have you ever noticed artists wearing what seems to be a radio on their waist with an earplug on their ears? That is an earpiece.

The earpieces, which are also called In-ear Monitors, help singers listen to various audios without affecting their performances.

They help you monitor what is playing and how it sounds like.

Live performing artists can hear the music they are playing right on the stage.

The earpieces are an upgrade from the wedges that were used as a monitoring system.

The wedges helped the singers hear themselves better when performing and also reduced what the audience hears.

The rack-mounted transmitter transmits to multiple bodypack receivers, which means multiple people can hear what is being broadcasted.

However, the receiver can only receive from one transmitter.

Why Do Singers Wear Earpieces?

If you have ever gone to a concert, then you know how the noise can be too loud even when you are back.

Now think of the people at the center of it all, the noise for them is quite loud and potentially dangerous to their hearing.

When singers are on stage performing, they are always surrounded by noise from all over the place.

Therefore, they have to wear earpieces to protect themselves from ear damage.

A loud noise will make you experience some type of ringing, which is not harmful, and it goes away after a day or two.

However, when you are constantly exposed to the noise, you’ll damage your hearing even permanently.

Singers understand this, that is why before walking to a stage, they have to wear it.

In a concert, several things are working at the same time to provide the audience with a nice music performance.

Speakers, for instance, help in amplifying the songs for the audience to hear well.

The sound monitors help in producing clear music without adding other frequencies such as bass and treble.

When all these are at work together with the singer’s performance and the crowd’s cheering, there will be issues with the sound quality.

They cause feedback and also phase problems that affect the performance of the singer.

The earpiece helps in countering that by providing clear sound quality.

The eliminate the live audio, ensuring the singer only hears what is necessary. Move Around the Stage

Earpieces also help the singer in moving around the stage when performing.

The presence of the stage monitors makes it harder for singers to move around the stage freely.

They take up lots of spaces on the stage which constrict the singer in one area, which is not an ideal good performance.

These stage monitors also have many wires which could trip the singer leading to a fall and injuries.

Singers also have to take a certain angle for them to hear properly, which is not good. For this reason, earpieces are ideal.

Earpieces help to prevent all this and provide the singer with the luxury to move around the stage freely.

The singer will focus more on giving an outstanding performance instead of worrying about falling or distorted sound.

Another reason why singers wear earpieces is to have a mix fully customized.

When on stage performing, the band will rely on a certain arrangement to achieve an excellent performance.

A singer may want to know that they are pitching all the notes correctly during a performance. They will do this by having their voices at the forefront of the monitor.

However, with the help of earpieces, everyone can perform without limiting the other person.

Help in Metronome Use

Earpieces help singers stay on track and avoid appearing unprofessional. In a live performance, a singer may start on different temp, which may damage the whole performance.

A metronome is used to avoid the embarrassment that comes with this.

The metronome allows the singer to stay in time by producing a click sound on the marked time at the selected tempo.

Metronome is a device used to steady music when performing on a live stage or when practicing. The metronome has to be set on the precise tempo.

The earpiece is also essential, especially for singers who have pre-recorded backing tracks in their performance.

If they are not careful with time, the track will not rhyme with the actual performance.

Earpieces also provide sound consistency by allowing singers to hear the exact mix throughout the performance.

The size of the room where the artist performs determines the performance of the band or the singer.

This is because each venue produces a different sound, which the singers have to circumvent to come up with fantastic performance.

A singer on tour will have to perform on different venues, which might confuse them and affect their performance. Also, the location of a drummer or a guitarist on the stage will affect the singer.

The singer will struggle to hear what sound one is producing from the other. A singer will wear an earpiece to avoid this confusion.

The singer can also move around freely without the worry of not hearing the drummer or guitarist when wearing an earpiece.

What are the Advantages of In-Ear Monitors?

Better Synchronization– as earlier mentioned, musicians wear earpieces to listen to their own performances. This allows for a better harmony with other band members to ensure that their performance flows smoothly just as their recorded versions of their songs.

The reason is that they are frequently subjected to loud sounds and with time repeated exposures results to the loss of hair cells in the inner ear. These hair cells contain sensory receptors that send sound to the brain.

But according to research there’s need for massive education on the use of IEM’s should be introduced as most performers tend to set their in-ear monitor to similar loudness levels to that of the previously used floor monitors.

Additionally, some singers take off one of their two IEM’s during a live performance to allow them to hear more ambient sound. However, this also increases the chances of noise induced hearing loss.

Even though some IEM’s have compressors or peak limiters to help reduce potential damage to sudden loud sounds, however this function does not limit the singer from increasing the sounds of the IEMs to unsafe levels.

There are two types of earpieces you’ll find in the market, the generic type, and those that are custom sized.

Both are effective at monitoring a playlist; however, they will differ in terms of comfort.

People have different ear sizes, so when you buy a generic earpiece, the chance is it may not fit you perfectly.

Customized earpieces, on the other hand, are designed depending on the size of your ears.

Whenever you wear them, you will feel comfortable, and you won’t have to worry about them falling when performing.

Also Read: How to Quiet a Drum for Apartment Practice DIY Style

1 thought on “Why Do Singers Wear Earpieces on Stage? (What You Should Know)”