Silent fireworks, otherwise known as quiet or low noise fireworks, are perfect for occasions where loud noises are not permitted or restricted.

If your neighborhood or the surrounding area has livestock nearby or sensitive residents, you must opt for low noise fireworks.

According to research, even though silent fireworks are not as loud as regular fireworks, they are designed to leave nothing except the loudness. They will light up the sky brighter but will not annoy your neighbors with loud noises.

What Are the Different Types of Noiseless Fireworks?

There are three types of quiet fireworks, and they include:

How Loud Are Silent Fireworks?

Despite being dubbed as quiet fireworks, they are not entirely quiet, but they are significantly quieter than regular fireworks.

They register sound decibels much lower than the regular 150-170 decibels of the loud, regular firework, which can contribute to hearing damage.

You’d be surprised to learn that quiet fireworks aren’t a new invention- they’ve been around for decades as part of the normal fireworks display.

Unlike regular fireworks, they display the most beautiful colors since they don’t have big explosions.

The loud explosive fireworks have few colors because the force created to shatter the pellets is responsible for the signature red, green, and blue.

When to use noiseless fireworks

Noiseless fireworks are ideal for many different occasions, including:

What Are the Benefits of Quiet Fireworks?

Unlike regular fireworks, silent fireworks offer so many benefits, not only to humans but also to wildlife and livestock. Below are some of the benefits you get:

Sudden booms could make them recall the duck and cover response to such veterans, raising anxiety.

If you’re a veteran and live in areas where fireworks are the norm of the day, I would highly recommend you check out this guide published on Michigan Health detailing how to cope with PTSD during fireworks season.

In some states, some veterans put signs outside their houses to alert their neighbors to their predicament.

For this reason, I would highly recommend you to opt for silent fireworks, especially if you have veterans living in your community. This will go a long way in helping them live a comfortable life without any triggers or bad memories of war. 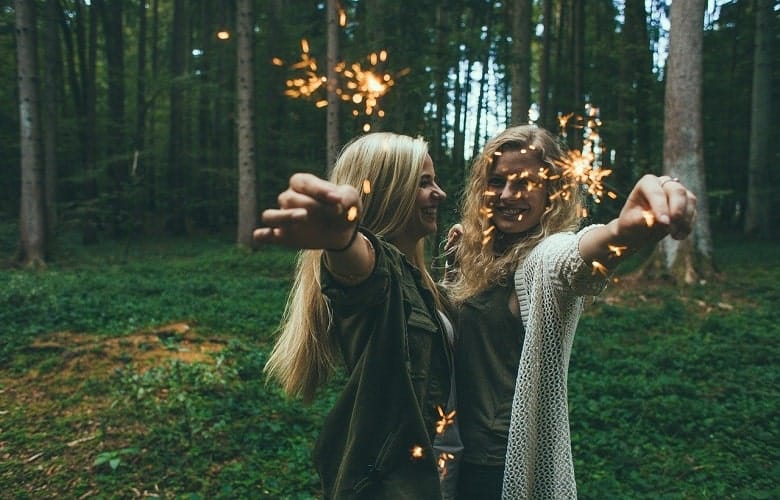 Did you know that your dog’s hearing is many times more acute than that of a human?

If fireworks arrive without warning, they could trigger a startle reaction in dogs, resulting in acute fear and anxiety in a situation they can’t understand.

Like humans, it can trigger a surge of adrenaline, racing hearts, causing a need to flee.

According to research, dog shelters often report an increased number of lost dogs after the 4th of July as terrified dogs run for their lives. (Source)

If you find yourself in an all noisy neighborhood, I would highly recommend you consider soundproofing your dog’s crate.

Loud explosive bangs associated with fireworks can be detrimental to children, especially some children with autism.

According to an article, I read recently, the fourth of July can be pretty distressing for kids with autism. (Source)

As we all know, people with autism are pretty sensitive, and sounds related to fireworks displays can easily overwhelm them, resulting in panics and anxiety.

Such kids with special needs need not be left out during such celebration.

Even though it may be impossible to take them out for fireworks displays that are normally loud, it’s highly advised you consider investing in silent fireworks.

They need to feel the love as well as get involved in the celebration.

Alternatively, you can also consider investing in some noise-canceling headphones to help shield them from loud noises.

The birds are also affected. An article published on the New York Times website reports that over 5000 red-winged blackbirds died due to fireworks explosions in the small town of Beebe, Arkansas, during the 2011 new year eve celebration. (Source)

While the deaths were not directly associated with the fireworks explosion, studies show that the possible sounds from the fireworks might have disoriented them, making them fly into trees and houses.

If you invest in quiet fireworks, you’ll not only be saving the birds but also be benefiting your neighbors and pets likewise.

With all the animal and human populations negatively affected, it’s high time we opted for a change in how we display fireworks.

Some towns in Canada, Europe, and the United Kingdom have adopted the change, with others like Colicchio in Italy banning loud fireworks.

Here in the United States, Costa Mesa in California has already switched to low noise fireworks.

Previously, it was almost impossible to find them noiseless fireworks, but now they are easily available online through companies such as Phantom Fireworks.