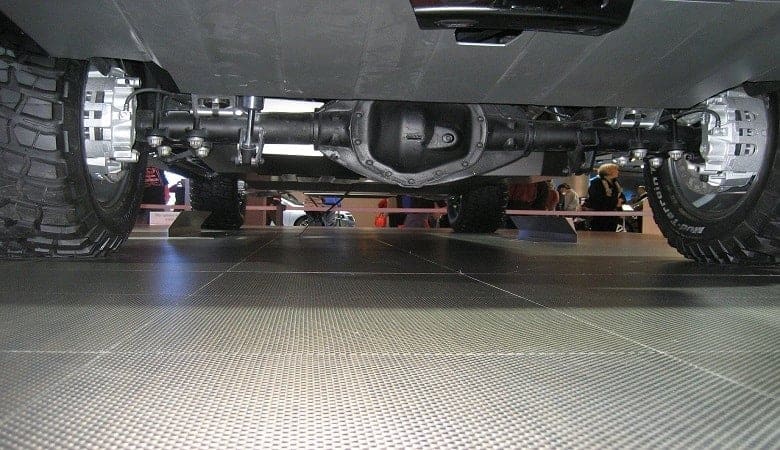 A failing differential (rear and front) will make a whining, whirring, humming, and howling noises. These noises will gradually change with acceleration, deceleration, or when making a turn around the corner.

But the most common sign of a failing or failed differential is a whining noise, mostly due to differential fluid leaking. If you notice some reddish fluid under the differential, it certainly means that there’s a leak.

A faulty differential can cause poor car handling. According to data released by the Federal Government, 2% (44,000) of car accidents result from mechanical failure.

In most cases, the failure originates from faulty parts or inadequate maintenance. Below is a table showing data on different causes of accidents on our highways.

Data from the NHTSA, Department of Transport (Traffic Safety Facts)

In this guide, we shall be looking at some of the different methods on how to quiet a differential whine and remedies to prevent the problem from reoccurring again.

What Is a Differential and How Does It Work?

A differential is a set of gear trains that transmits the engine power to the wheels allowing your car wheels to turn at different speeds when cornering. When cornering, the outer wheel travels the furthest distance and faster than the inside one. This is enabled by the differential.

Four-wheel drive (4WD) and all-wheel drive (AWD) vehicles add a center transfer case or different to help distribute power to both the front and rear wheels.

Hybrid cars, such as the Toyota Prius, have what is known as electronic AWD and use electric motors to power the rear wheels and turn the slower or faster as needed on turns. Diagnosing the different types of differential noises is very important. And even though most vehicles’ sounds are normal when cruising, there are times when noise coming from under your car can be an indicator of a serious problem. Below are different noises that a faulty differential makes.

Whirring noises at speeds over 20mph could also be an indicator of worn carrier bearings.
class=”twitter-tweet tw-align-center”

If you hear rumbling when driving at speeds over 20mph, it could be as a result of worn-out carrier bearings. However, it’s important to note that the noise can change while turning or cornering. If you hear a rumble when cornering or turning, it could indicate bad wheel bearings.

Clicking or clunking sounds when driving that occur every few meters/feet could be an indicator of a broken pinion gear tooth or ring. Additionally, clunking or banging sounds when reversing, cornering, or rapidly decelerating at high speeds indicate worn clutches, gears, lack of lubrication, or improper lubrication.

When accelerating when driving over low or large speed ranges, a howl or whine noise is often associated with worn pinion gears and ring gears. It could also be an indicator of improper gear setup.

If slowing down- when not braking- and notice howling noises, that’s an indicator of bad pinion bearing.

Steady vibration that increases as you accelerate is a sign of worn-out u joints. It also could indicate an out-of-balance driveshaft. However, if the vibration is too much when driving at a particular speed or when decelerating, then it could be that the pinion gear is misaligned.

Grinding or squeaking noise when driving is an indicator of a damaged or worn-out universal joint. Knocking sounds from the differential could indicate chipped gear teeth or worn axle splines.

Differential noises and wheel bearing noises are almost identical, and one is in most cases mistaken for the other.

To diagnose a faulty differential whine- here’s what I highly recommend. Take your car to a not so trafficked road and a fairly flat one.

Drive about 50-60mph and listen for ring and pinion sounds when accelerating.

Slightly turn left or right but do it gently to avoid veering off the road and listen to the noise that comes underneath your car. If the noise gets louder when steering to the right or left, the culprit is the wheel bearing, but if it stays the same, it’s from the front or rear differential.

You can also put your car on jack stands such that the wheels are off the ground, switch off the vehicle and shift it to neutral position and rotate one of the wheels forward or back. Most cars have an open differential system, and so when you rotate one wheel, the other should rotate in the opposite direction.

If the two wheels rotate in the same direction, you probably have a problem with your differential, or your car isn’t fitted with an open differential.

Alternatively, have one person hold one wheel while you rotate the other. You should be able to rotate one wheel when the other is held. If the two wheels lock, you have a problem with your differential.

Lastly, while the car is on jack, start the engine, shift to drive, and let the two wheels spin. Watch out for the moving parts and listen keenly to the differential.

There is a problem if it makes whirls, clicks, howls, grinds, vibrates, or any strange sounds. A well-functioning differential should operate quietly.

How To Quiet Differential Whine

Not only does a differential whine cause annoying and unwanted noises, but it can also result in poor car handling result in fatal crashes. If you have some technical knowledge of mechanics, you could probably fix the problem yourself. Below are some of the most important ways to quiet a differential whine.

Alternatively, if you don’t have technical details on car mechanics, you should visit your nearest car mechanic as soon as possible to have the problem fixed.

The first and the most important step in quieting a differential whine involves preparation. You need to set your car on a jack stand or ramp to access the differential.

The differentials come in different designs, and how long the fixing will take will depend on the type of differential your car has.

Some differentials have a drain port, while in others, you will need to open the housing to drain the fluid.

If the differential fluid contains tiny pieces of metals, you will need to remove the cover plate for proper inspection. You should consider replacing the seal as well, but only if there’s a leak. You should be able to determine if there’s a leak by looking at the spot where you park your vehicle.

Replacing the differential output shaft seal will take approximately 3-5 hours since you have to remove the wheels and the axle.

After replacing both the seal and the oil, you should take your car out for a test drive to determine where the noise problem has stopped. If the noise doesn’t go away, it shouldn’t mean that you did anything wrong; there could be a bigger problem with other parts of the differential system.

Inspecting The Pinion Seal, Gasket, and The Side Seal

This is a time-consuming activity but will eventually solve the differential whine if replacing the fluid and seal didn’t fix the problem in the first place. Simply drain the oil and inspect the rear differential gasket to see if it’s broken or worn out. If broken, you should replace them as soon as possible.

If there’s no leak but still experiences noise, the problem is with the gasket. You only need to drain the fluid and replace the rear differential gasket. However, if the pinion seal requires replacement, that’s where things get tough.

Pinion Seal: You will need to remove the yoke in this case, but first, remove the seal around the yoke, pull it out, replace it with a new one, and refill with a good differential oil.

You sometimes need to replace other parts, such as damaged bearing and worn-out teeth. At times replacing the bearing will fix the noise problem. But in most cases, the bearings aren’t the only thing that requires replacement if the noise is too much. You will need to replace gears with chipped or worn-out teeth. You may need the help of a qualified mechanic for repair.

How Much Does It Cost to Fix a Differential?

Below is a table showing the approximate rear differential replacement costs.

Sometimes you need an additive to help improve the differential oil for best and long-lasting performance.

There are different additives for noisy differentials, but the Lubro Moly Gear Oil Additive is the most recommended one. It’s available in 50g tube designed for manual shift transmissions, steering boxes, differentials, rear axles, and front differentials, aka transaxles.

Why Is My Rear Differential Whining?

If the noise comes from the inside the differential, it could be too much backlash on differential gears or tight-meshing pinion gears. Another cause of the whining could be faulty differential-case bearings, and these could also cause noise when turning.

How Do You Stop Diff Whine?

The problem could be a backlash if you hear noise coming from the differential after taking foot off gas ped without applying brakes. To fix the problem, purchase a mag base dial indicator or a cheap dial caliper and set it on the heel of the gear. Hold the pinion and slightly move the ring gear back and forth and see how it moves. If you have some R&P, the backlash should be scribed on the side of the ring gear. Set it up using the side spanners till you get the right setting.

In conclusion, a differential plays an important role in your car drive system. It’s one of the car’s systems that doesn’t require regular maintenance; in fact, it could take thousands of miles before requiring any repairs or replacement. It’s always important to follow the manufacturer’s recommendation on the fluid replacement to avoid expensive repair or costly parts replacement. If you’re experiencing differential noises, I’m certain you now have an idea of the parts that need repairs or replacement, as well as the overall approximate cost of the repair.